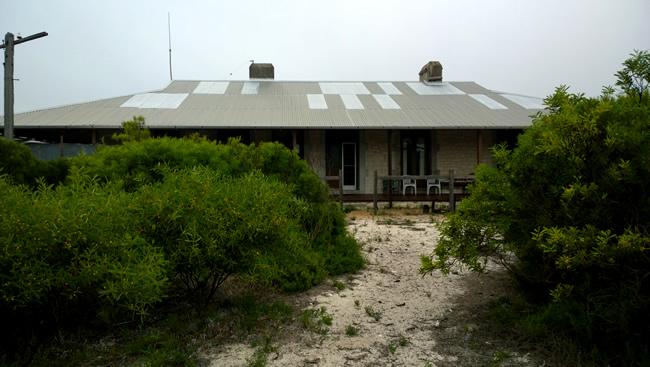 The restored limestone Telegraph Station building that houses the Eyre Bird Observatory, Eyre, Western Australia. The Telegraph station was abandoned in 1927 and the rights to salvage the timber and fittings sold to a local farmer. He removed much of the internal fittings and timber, but the roof was too much of a challenge for him, so it was left intact. This protected the building so that when in 1976 the Royal Australasian Ornithologists Union began negotiating with the Post Office Historical Society to restore the building and use it as both a museum and a bird observatory it was still in restorable condition.

The site was chosen for a bird observatory because the fine old building is eminently suitable, it is located in the middle of the 625 000 hectare Nuytsland Nature Reserve. It is possible to study some of the ocean going sub Antarctic birds as well as the native birds of the mallee. April 2014