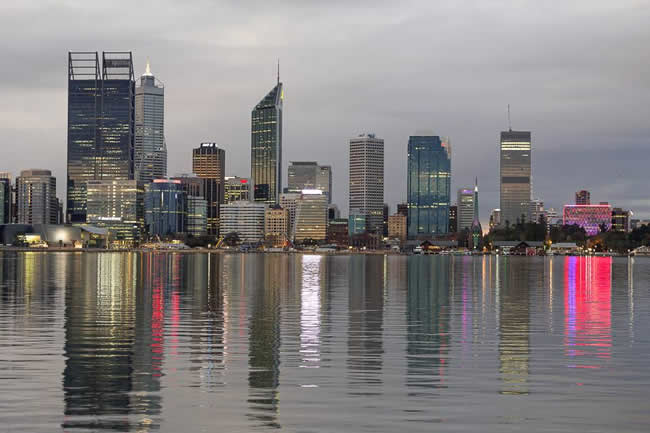 Twilight view of Perth, from across Perth Water, Western Australia. The fast growing capital of Western Australia has a constantly changing skyline. At dusk on a still winter evening. July 2015.

The town hall clock tower, Perth, Western Australia The Town Hall Clock Tower was built in 1868. It is 38.1 metres high, and the face of the clock has a diameter of just over two metres. The clock itself was built by Thwaites and Reed of London. It was originally manually wound, but in 1956 electric motors were added to do the winding. Which is a good thing because it required climbing a 67 step ladder to do the manual winding.

The clock has been maintained since 1932 by the Ennis family. Aside from major costs this was all done as a public service! Three generations of this family, which also operates Ennis Jewellers, have been involved in this work.

The bells were also built in 1868 by Mears and Stairbank, of Whitechapel, London. There are three bells. An hour bell at 305 kg, and two quarter hour bells at 203 kgs each. April 2014.

More info can be found at the Heritage Perth website. 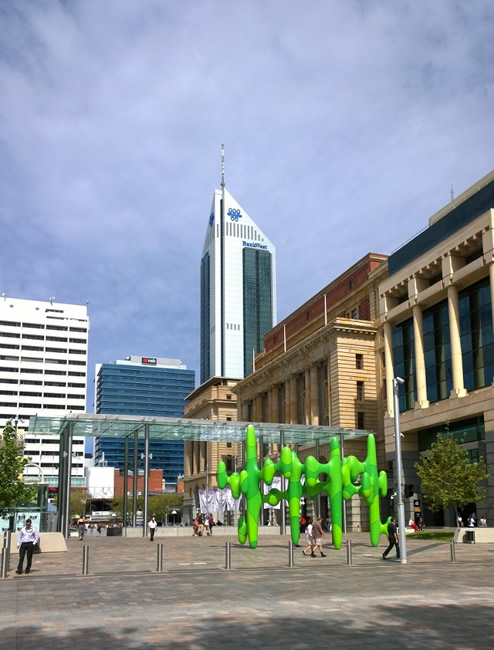 Sculpture 'Grow Your Own', in Forrest Place, Perth, Western Australia The Grow Your Own sculpture, colloquially known as The Green Cactus, was erected in 2011 in Forrest Place in Perth. Designed by James Angus it was purchased by the WA State Government at a cost of more than one million dollars. April 2014. 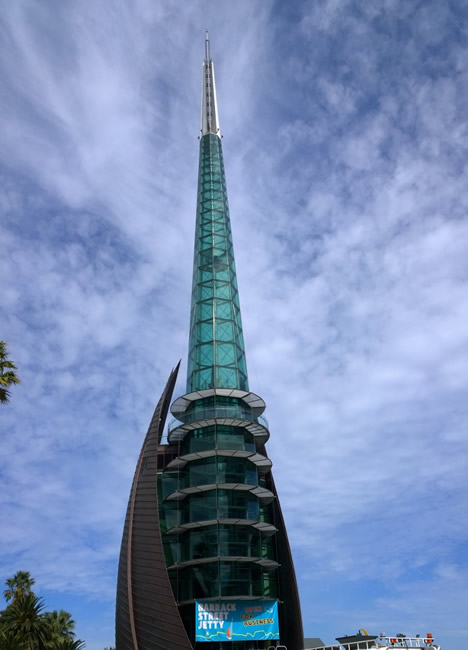 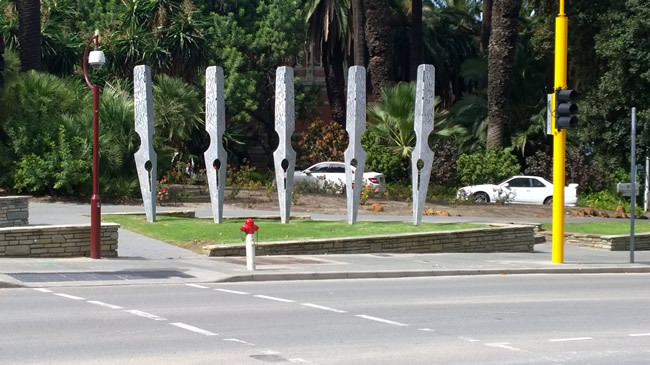 Memory Markers sculpture, Stirling Gardens, Perth, Western Australia The Memory Markers sculpture in Stirling Gardens was created by Anne Neil and unveiled in 2005. They are cast aluminium pen nibs, each 3.5 metres high, and are dedicated to the planners of Stirling gardens, the first botanical gardens in Western Australia. It also honours those who recorded the history of the gardens. Photographed April 2014. 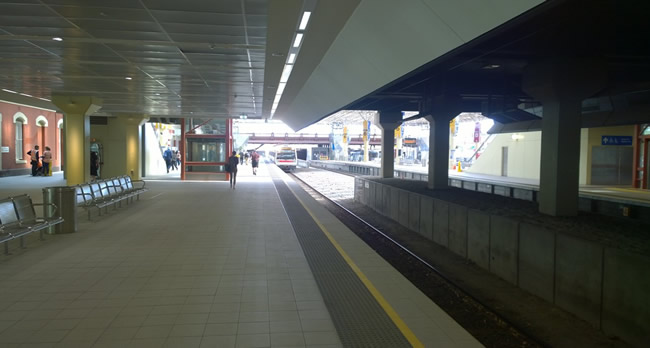 Wellington St Station, Perth, Western Australia, in April 2014 The Wellington St station in Perth is the central hub of a modern light rail passenger transport system in Perth and its suburbs. It has in recent years been extended as far south as Mandurah. Photographed April 2014. 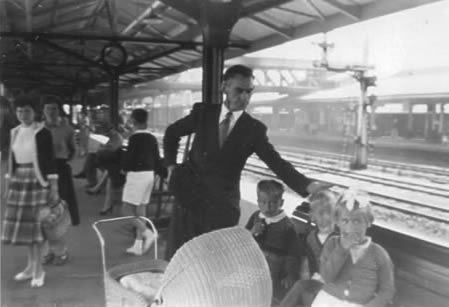 Wellington St Station, Perth, Western Australia, in the late 1950s The Wellington St station in Perth in the late 1950s is a far cry from the modern station in the picture above. Then the main locomotives were steam powered, though diesels were beginning to make inroads. Now electric trains are becoming the norm. This picture and the one above were taken at roughly the same place on the station.

Copyright © Willem Schultink From a private collection of photos. 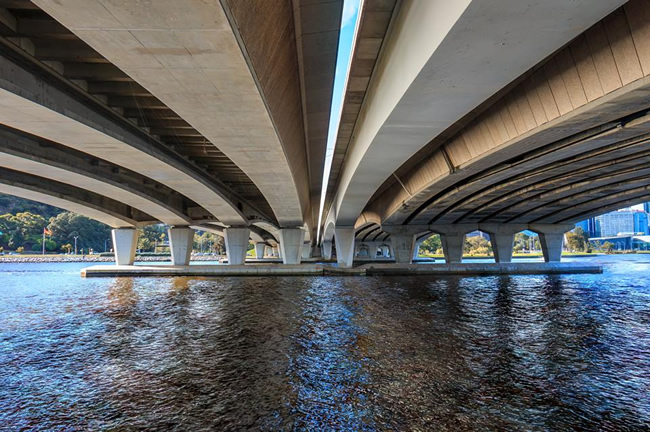 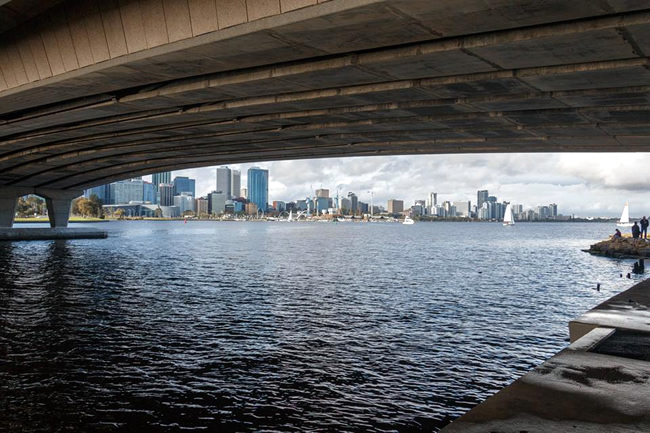 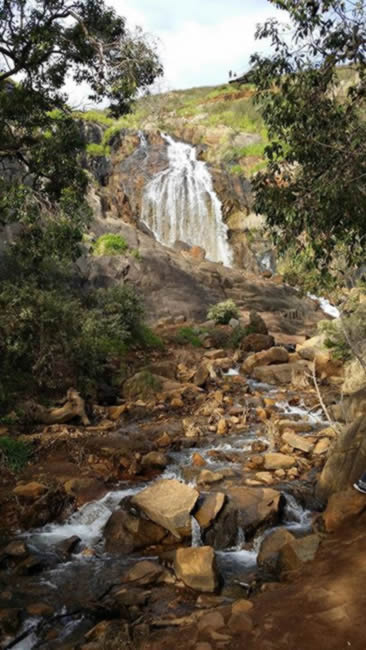 Lesmurdie Falls, part of the Mundy Regional Park, near Perth, Western Australia The Mundy Regional Park is about 22 kilometres east of Perth on the Darling Scarp, overlooking the Swan coastal plain. The falls themselves are 50 metres high and are formed by the Lesmurdie Brook going over the Scarp.