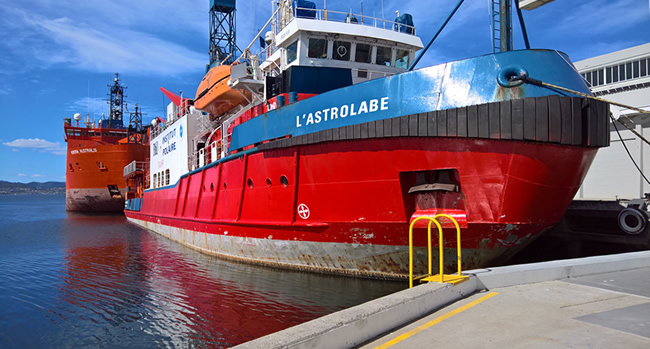 Australia's Antarctic supply ship, the Aurora Australis. and the French polar research vessel and icebreaker L'Astrolabe in Hobart, Tasmania, Australia. The Aurora Australis replaced the Nella Dan in 1990. (The Nella Dan was wrecked at Macquarie Island in 1987.) She is 94 metres long and displaces just over 8000 tonnes. She is capable of breaking ice of up to 1.2 metres thick at a speed of 2.5 knots. Owned by P&O she is usually chartered by the Australian Antarctic Division during the summer, but winters in Hobart. She has also been chartered by the Australian Navy. She has a hangar and helideck for three helicopters. September 2016.