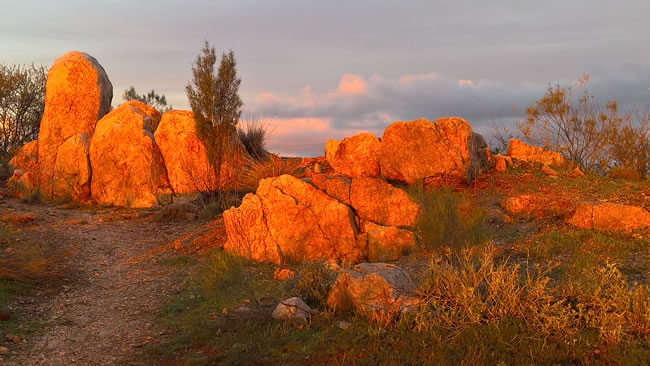 Afternoon sunlight lights up the white rocks at the White Rocks Reserve, Broken Hill, New South Wales Australia. Walking through the White Rocks Reserve on the outskirts of Broken Hill, my wife saw the sunlight slipping through the clouds near the horizon. We waited for some time for the light to be just right. You can see her quite different shot of the same place in the picture below. June 2016.

White Rocks was the site of a gun battle between two Turkish sympathisers and police and members of the Volunteer Rifles on New Year's Day 1915. They had attacked a picnic train carrying 1200 people to Silverton. The 'Turks' (Actually Afghans from what is now northern Pakistan) sought refuge here on their way back to the Afghan camel camps. After a 3 hour gun battle they were both killed. Four other people were killed and seven wounded, in the only action on Australian soil in WW1. An earlier jihad, perhaps?