A trip through Tasmania, Australia

A trip through Tasmania, Australia

Tasmania, Australia. The Apple Isle, as it used to be known. It has also been called ' the island that's Australia's bejewelled earring.' Haven't heard that one before!

Tassie is a beautiful place, but lags behind the rest of Australia economically, resulting in a contraction of the population, losing more than 20 000 people annually at present. This is due partly to it's isolation - 100 miles of water is a natural barrier - and partly due to an unwillingness to develop.

But it's natural beauty is undeniable, and in these pics, mainly from Fred Vanderbom, we can see some of it. Thanks, Fred, for the privilege of using your pics.

Fred grew up in Tasmania and lived there for years. Although he now lives in South Australia, he still loves Tassie! He is also pretty handy with a camera.

Pictured here in Devonport on the northwest coast of Tasmania, the Spirit of Tasmania sails from Station Pier in Melbourne, taking about 14 hours to complete the trip to Devonport. There are actually two identical Spirit of Tasmania ships, both built in Finland. They cover the same route but in opposite directions, passing each other in the night. That enables a daily service to operate consistently.

There was actually a third Spirit of Tasmania for a while, operating out of Sydney, but patronage wasn't enough to make it economically viable.

Bishop and Clerk, Maria Island, Tasmania, Australia. The "Bishop and Clerk" peak at the northern end overlooks spectacular cliffs which contain so many fossils that this area was mined for some years in the 1920s for a cement industry on the island. Autumn 2013.

These mountains look a bit like a bishop with his mitre followed by his clerk, hence the name.

Maria Island was named by that tenacious and capable Dutch seaman Abel Tasman, after whom Tasmania is named, in honour of the wife of the then Governor-General of the Dutch East Indies in Batavia.

After being used by sealers, whalers and smugglers for a while, a convict settlement was established on Maria Island in 1825. By 1884 it was closed and the island leased to an Italian businessman Diego Bernacchi, who established vineyards and the Grand Hotel, and later also a cement works. These ventures all eventually failed, and the island became a haven for holidaymakers, which it still is today. It was declared a wildlife reserve in 1971 and a National Park in 1972. 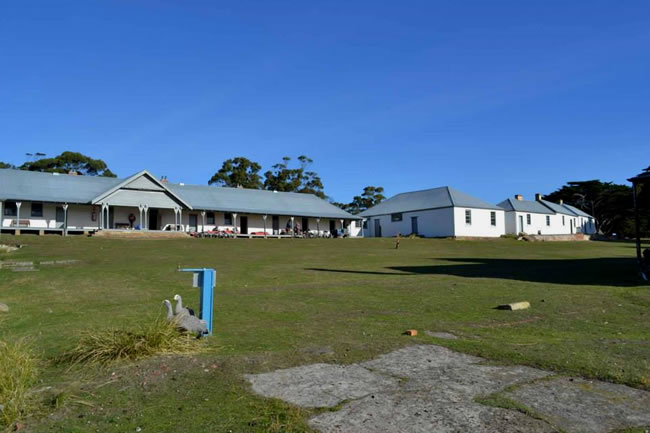 Convict barracks, Maria Island, Tasmania, Australia. Maria Island: the barracks of the convict era have survived and are used as accommodation for campers and school groups. Autumn 2013.

Maria Island was originally inhabited by part of the Oyster Bay Aboriginal tribe. There were two periods of convict presence on the island: between 1825 and 1832, and later on as a probation station between 1842 and 1851. These are the barracks, built by the convicts for convicts

Irish nationalist leader William Smith O'Brien's convict cottage, Maria Island, Tasmania, Australia. Smith O'Brien was an Irish nationalist who was "transported" to suit Ireland's British overlords in the early 19th century. He lived in this cottage for some time and also at the better-known Port Arthur address. Eventually he was allowed to return home and continued to support Irish independence. Autumn 2013.

Smith O'Brien was exiled for his part in the Young Irelander Rebellion of 1848. After Maria Island he lived at the Port Arthur penal colony for a time before being transferred to New Norfolk north of Hobart. 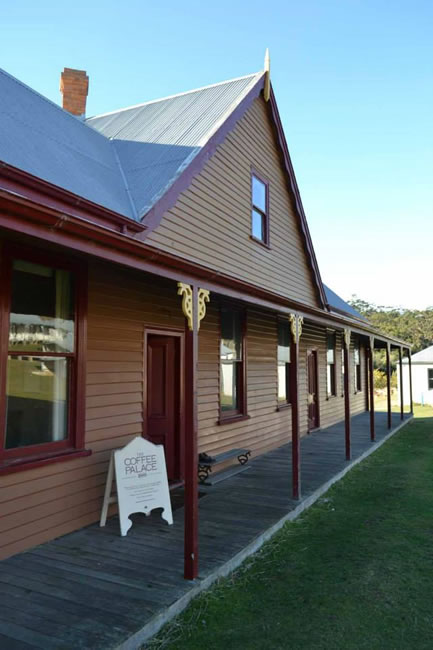 The Grand Hotel, Maria Island, Tasmania, Australia. The Grand Hotel was built late in the 19th century to accommodate visitors to the vineyards and later cement industry on the island. I (Fred) stayed here too during several week-long adventure school camps in the 1960s. Autumn 2013.

This was part of Italian businessman Diego Bernacchi's dream for this island. I reckon he was a visionary, before his time. If he had established vineyards and a hotel in the early 21st century he would have established a first rate resort in a truly beautiful spot.

Wombat, Maria Island, Tasmania, Australia. Today Maria Island is a wildlife sanctuary for native birds, mammals including lots of wombats, and a colony of Tassie Devils which we found very reclusive; they are threatened by an infectious cancer. Autumn 2013.

The iconic Tasman Bridge over the Derwent River, Hobart, Tasmania, Australia. Hobart's River Derwent is full of history and memories, including the Tasman Bridge. Autumn 2013.

On 5 January 1975, the bulk ore carrier Lake Illawarra, carrying 10 000 tonnes of zinc upstream to the Electrolytic Zinc works, hit the pylons of the bridge causing three of its spans to collapse. The roadway landed on the ship causing it to sink within minutes. Seven crew members were drowned because they were below decks at the time.

Five people in four cars that drove off the bridge were also killed as a result of the 45 metre fall into the river. Several other cars just barely stopped in time and ended up with their front wheels dangling over the side.

The loss of the bridge link between the eastern and western sides of Hobart caused some significant social problems. The bridge was re-opened on 8 October 1977, some twenty one months after the collapse. There is a very useful article on the bridge collapse and it's effects on the local community in Wikipedia. 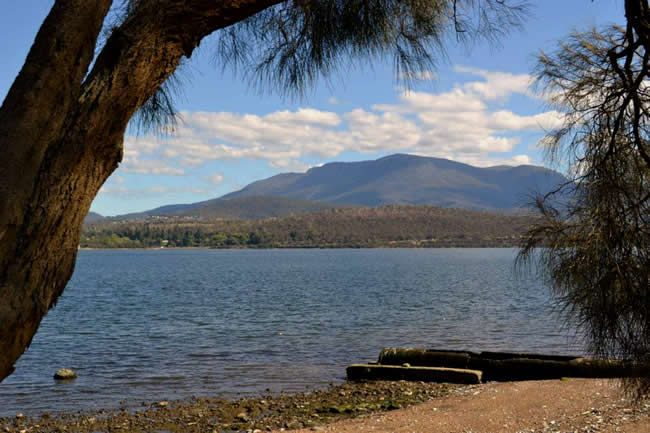 Mount Wellington, Hobart, Tasmania, Australia. Hobart's Mt Wellington dominates the landscape, and the city's Domain makes this photo look as if the State's capital is all bush. Autumn 2013. 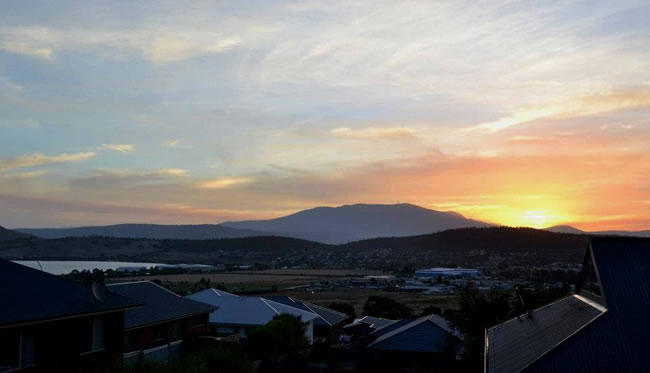 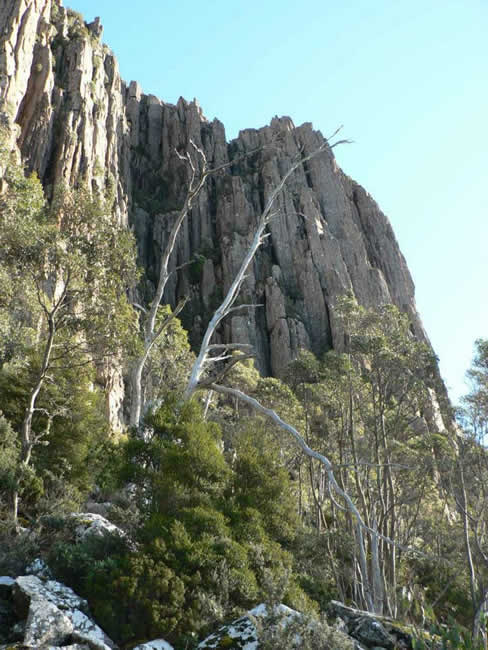 The Organ Pipes, on Mount Wellington, Hobart, Tasmania, Australia. Hobart's Mt Wellington (1270m) close-up: its most familiar feature is "the Organ Pipes", the dolerite columns so typical of Tassie's mountains and coastline. Autumn 2013. 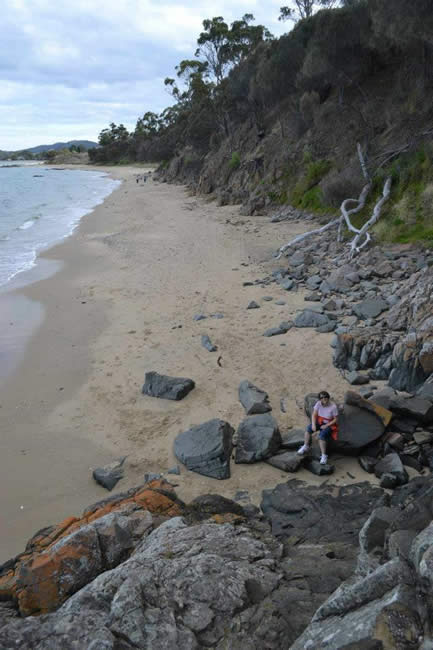 Roches Beach is a beachside suburb about 14 kilometres from the city centre, on the eastern shore of the river. At the 2011 census it had a population of 214. The beach is a great place to walk. 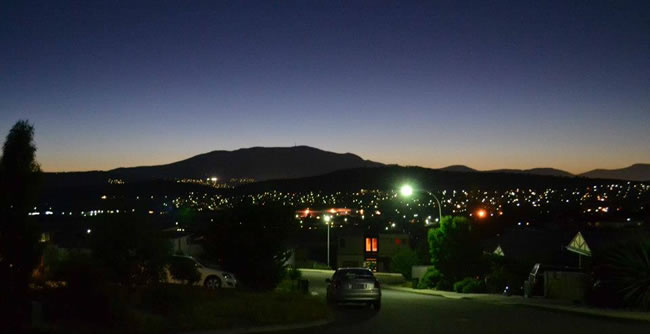 Hobart by night, with Mt Wellington ever present in the background, Hobart, Tasmania, Australia. Autumn 2013. 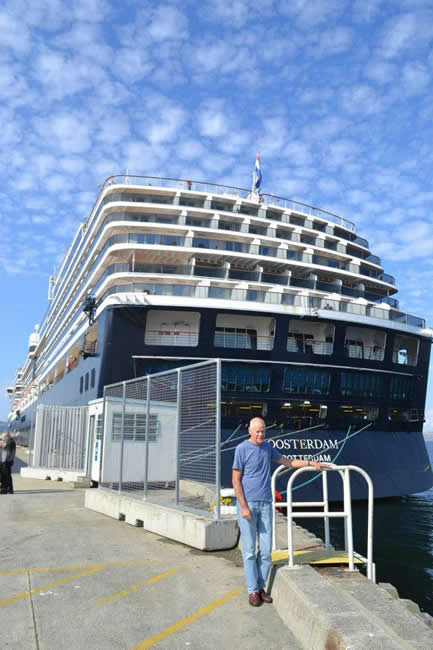 The cruise ship Oosterdam, Hobart, Tasmania, Australia. Appropriately flying the Netherlands flag (Abel Tasman was, after all, a Dutchman) the Oosterdam in port at Hobart. The Oosterdam was nearing the end of a 2 week round-trip of the Tasman Sea. Autumn 2013.

Tourism is a major industry in Tasmania, although it hasn't been able to arrest Tasmania's economic decline.

Although the Oosterdam is a very big ship at 290 metres length, and with a tonnage of 82 000 tons, she isn't even close to the biggest. The twin ocean behemoths, Allure of the Seas and Oasis of the Seas at 362 metres long and weighing in at 225 282 gross tonnage, are massively bigger. 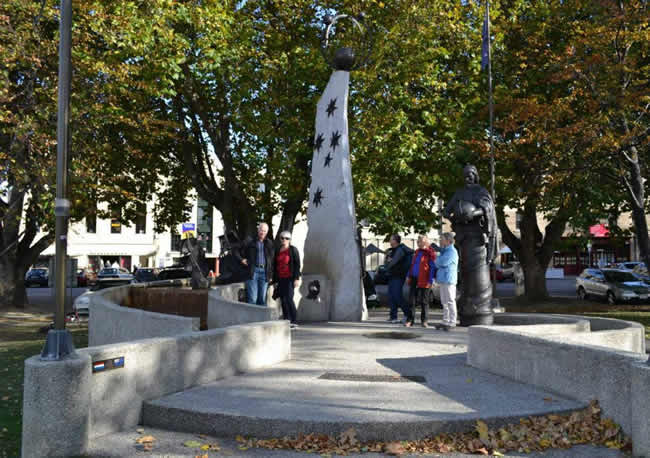 Abel Janszoon Tasman was born at Lutjegast, near Groningen, in the Netherlands in about 1603. In about 1632 he sailed for the East Indies and soon established himself as one of the most reliable skippers.

After several successful expeditions he was appointed to command two ships, the Heemskerck and Zeehaen to explore southern and eastern waters. He discovered Van Diemen's Land (Tasmania) making landfall just north of Macquarie Harbour on Tasmania's wild west coast on 24 November 1642. He went on to discover New Zealand, the Tonga Islands, and some of the Fiji group. On his return, and after a couple more expeditions, he was rewarded with a backdated pay rise! He died in Batavia in 1659.

Tasman was a tenacious and able seaman and navigator. According to the Australian Dictionary of Biography, which is published by the Australian National University, 'Tasman was a member of the Reformed Church. He was a brave and energetic mariner, a humane and properly cautious explorer, and a conspicuously able commander'. 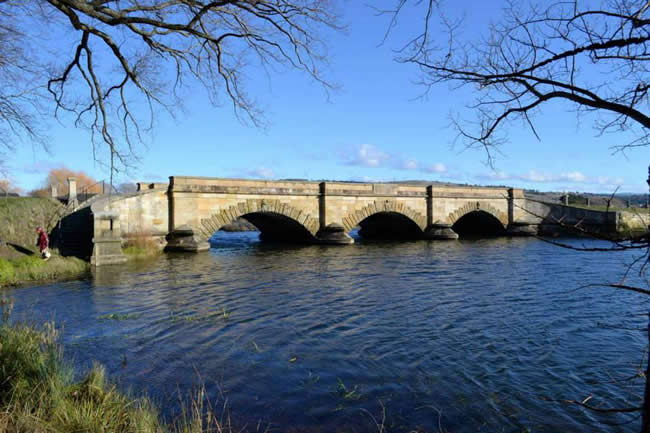 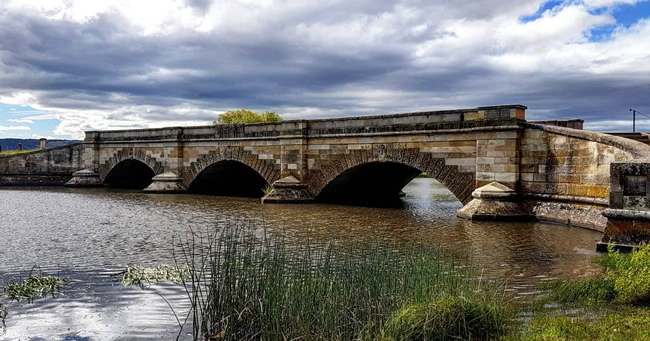 Another view of the convict built bridge at Ross, central Tasmania, Australia.

The Ross Bridge was finished in 1836. After some lengthy delays in construction, the Governor George Arthur appointed James Colebeck and Daniel Herbert as overseers of the project. Wanting to get it finished he offered Herbert and Colebeck conditional pardons if they got it done quickly. That worked, because it was finished 18 months later.

James Colebeck was a master stonemason and did an excellent job. The bridge is still standing and in sound condition today, almost 180 years later. Daniel Herbert was the artist that did most of the friezes and carved designs, completing more than 80 of the 186 carved designs personally and having the rest done by other convicts under his supervision.

More info about the Ross Bridge and the Ross township at the Ross Visitor Information Centre website.

The sandstone wall are hand carved, the ceiling is made from Oregon Pine, and the pews are made from Tasmanian Blackwood. But most importantly the gospel is preached there and praise is sung to Jesus regularly. That's what churches are about - telling the story of Jesus and praising his name. 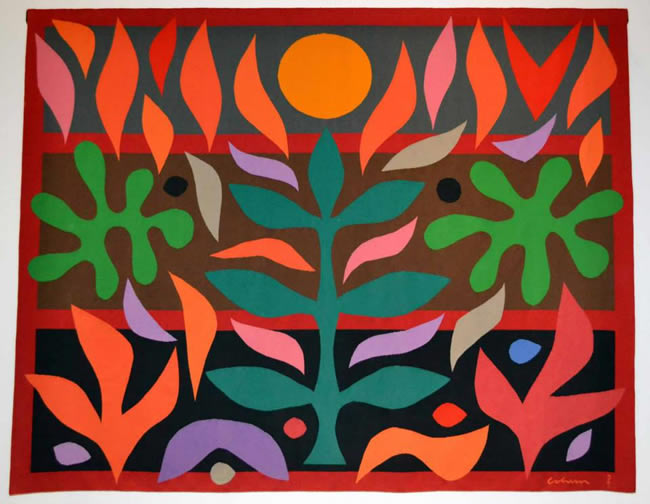 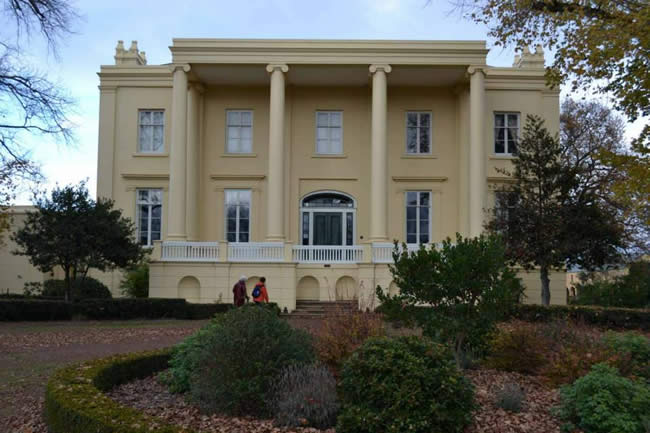 Clarendon, near Launceston, central Tasmania, Australia. Just south of Launceston is "Clarendon" built by a successful agriculturalist in the 1830s. It has recently been much restored and now Australia's largest Georgian mansion. Autumn 2013. 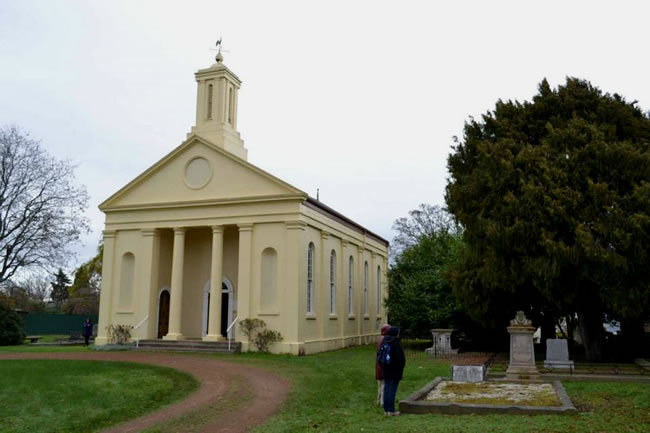 This is the stylish St Andrews Church - built as a Presbyterian place of worship in 1838 and now a Uniting Church property. Autumn 2013.

For a time I owned a couple of properties in Queenstown. One backed on to the town oval - the only AFL footy ground that I know of that has a gravel surface! Must have been hard on the knees of the players.

The surrounding hills are completely bald. All the vegetation was killed off years go because of toxic mining and smelting operations, and then of course the topsoil was washed away, making it difficult for vegetation to re-establish itself. But you can see it beginning, in gullies and cracks in the rocks. The vegetation will eventually return, re-establishing itself and providing an environment for the local fauna to also return. 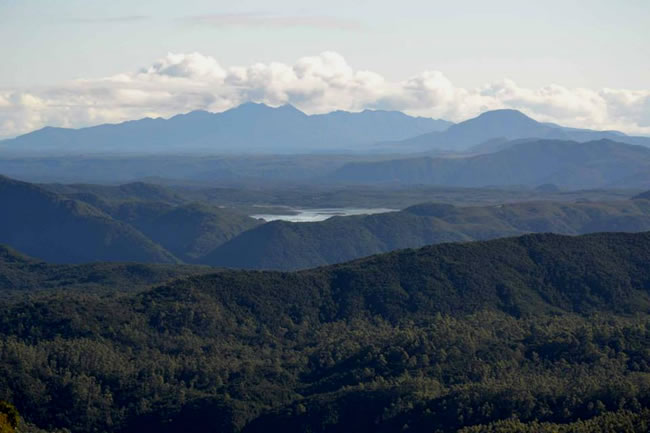 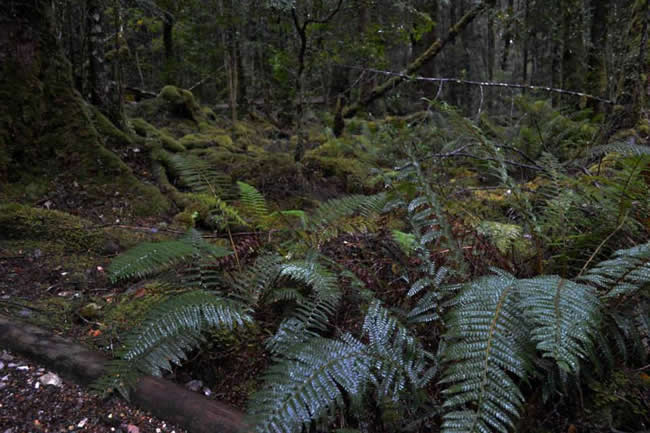 Rainforest on the west coast of Tasmania, Australia. The rainforest in western Tasmania is breathtaking. Autumn 2013.

In many ways it is similar to the forests in the Otways Ranges in south western Victoria. 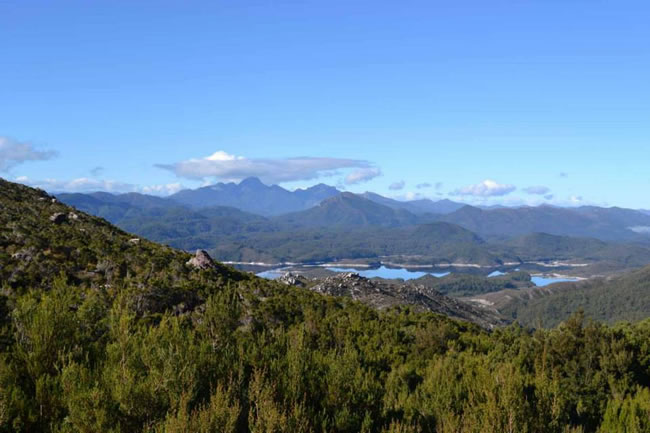 The Nut, Stanley, on the far north west coast of Tasmania, Australia. One Tasmania's oldest towns is Stanley which shelters at the foot of "The Nut" in the state's far north west. It is still a centre for fishing and agriculture. Autumn 2013.

Stanley was also the home of the only Australian Prime Minister from Tasmania, Joseph Lyons. The house he lived in is still there. He was a member of the Tasmanian State Parliament for 19 years including 5 years as Premier.

In 1928 he won a seat in the federal Parliament for the Labor Party, but he became unhappy with federal Labor infighting and left to form the United Australia Party. The UAP won the 1931 election. He served as Prime Minister from then until he died of a heart attack in April 1939.

His wife, Dame Enid Lyons, who was the mother of their 11 children, followed him into politics in 1943. She was the first woman member of the Commonwealth Parliament and served there for eight years until her ill health forced her retirement.