The march that wasn't

Three weeks ago, on Saturday the 8th of October 2011, I went on a march through Melbourne. With about 4000 other people! Down Wellington Parade, Flinders St, Russell St, Bourke St and finished at the steps of Parliament House in Spring St. You can see some of the march in Flinders St in the pic below. It fills one side of the road for at least two city blocks ahead and there are many more further back out of the picture. 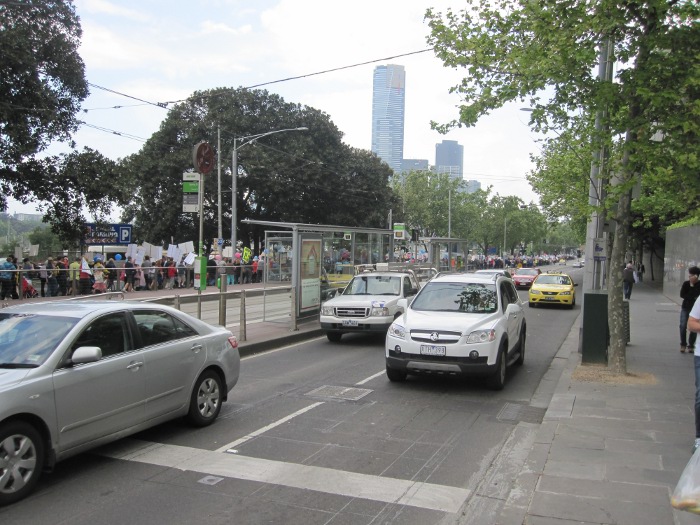 You read about it in the paper, didn't you. 4000 people marching through Melbourne would be on the front page!? You didn't read about it? Well, neither did I ... not in any paper I looked at. Not The Age. Not the Herald Sun. Not the Geelong Advertiser. Nothing Apparently it got a few seconds on the ABC news. That's all. But more about that later!

Actually, I didn't complete the march. Because of physical limitations I walked back up Spring St while the march continued down Flinders St. I was going to rest in the Treasury Gardens, but there was a lot of noise happening at Parliament House so I went to have a look. There was a group of very noisy protesters with loudspeakers. They seemed to be against the March for the Babies. It was only a small group - maybe 30 or 40 people, see the pic below - but they had powerful speakers and so were making a lot of noise. 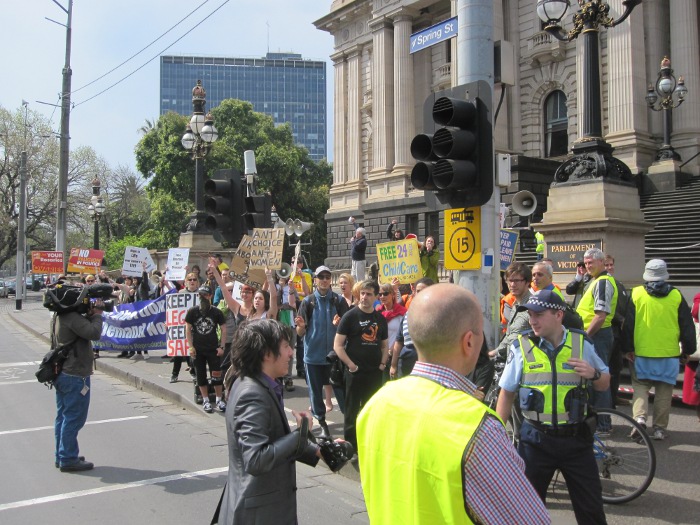 They had some slogans they were chanting repeatedly. We'll get back to them shortly.

The main march came up Bourke St and grouped in front of the Parliament House steps. They completely filled the intersection and grouped around the steps to hear people speak about the draconian abortion laws in Victoria. That is their right as citizens of Australia and of Victoria - to protest and to have their voice heard. There were a number of speakers, including a Member of Parliament, several of them women, addressing a number of issues. In spite of having a decent sound system they were struggling to be heard above the loudly amplified chants of that other small group on the steps next to them.

Some of the chants used by the anti-babies group to try to shout down the March for the Babies speakers:

We know what we want, and we want it now.

Shades of Verucca Salt! (if you don't know what that means, you need to read Charlie and the Chocolate Factory, by Roald Dahl) Verucca Salt was a spoiled brat who demanded everything from her daddy with an 'I want it and I want it now!' Her rich daddy was silly enough to give it to her.

It's enough to make you want to join the kindergarten for a more mature level of converstaion.

Not the church, not the state. Women will decide their fate.

Chanted loudly by a guy. During the whole performance of more than an hour only once did a woman get hold of the microphone, and then only for a minute or two. It was guys who were telling women what to do.

Right to life, still a lie. They don't care if women die!

Just look at the picture below. Read the banners. 'Save the babies. Help the mothers.' This chant itself is a lie. There are so many Pregnancy Help and similar places around the country where people give of themselves and their resources to help pregnant mothers in any way they can. Many of them offer post abortion counselling to those who suffer afterwards. They do care, deeply, and do something about it. Which makes this an even more grievous lie.

Notice the large number of young people in the march, and the number of women. They seem to be a diverse group of people from a number of cultural backgrounds.

Keep your rosaries off our ovaries.

Chanted repeatedly by an old, grey haired guy. I've never owned a set of rosaries in my life, but I was wondering where he kept his ovaries! Or maybe he thinks that he owns women's ovaries? Remember that women didn't get any say in this ... they had the microphone for just a minute or two in the whole performance.

I think this chant refers to a different debate, one about contraception. Given that babies are normally in the womb and the job of the ovaries had been completed at some stage before, this was a bit meaningless at this rally. But it was a good slogan to use to shout down other people.

Serious. Chanted by a burly guy in a T shirt. I'm almost speechless. Is this all he had to say?

1. Given that freedom of speech is a democaratic right in Australia, why is one small group of people allowed to do its utmost to effectively remove that right from another much larger group by shouting them down?

One of the foundations of democracy is freedom of speech. So both pro and anti abortion groups have a right to have their say. They both have a right to get a permit to address the public from the steps of Parliament House. But if one group uses that right to try to deny the other group the opportunity to exercise their right to the same thing then there is an abuse of the right of free speech.

We need to continue to give both groups the right to speak, without infringing on the rights of the other. What if we separate the groups, either by distance or by time?

Both of these solutions are fair to both groups.

2. The silence of the press. Why wasn't this major march in Melbourne reported in any of the press?

Aside from a short piece on ABC TV there was no mention made in the press that I could find. There were cameramen and journalists present, but it did not get into the papers. Why? A march of some 4000 people through Melbourne is no small event. Just looking at the pictures above shows that it was no small thing. But not a thing was reported. The much smaller 'Occupy' protest a couple of weeks later was all over the papers and the rest of the media.

This raises a question about journalistic ethics. Who decides to leave out major events like this? Ii is effectively writing out of our society's story the story of one segment of society. One part of society is being written out of our history. Who has decided this, and why?