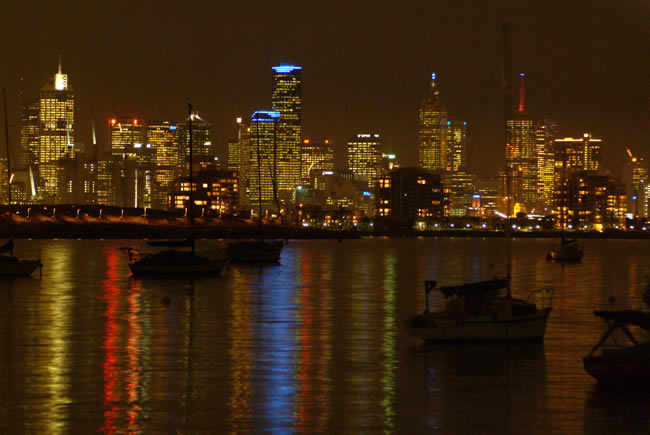 Melbourne's skyline at night, viewed from Williamstown, Victoria, Australia. The view from Williamstown toward the city center as Melbourne lights up for the night. Photographed on a relatively still night so as to capture the city lights reflecting in the water. May 2003. 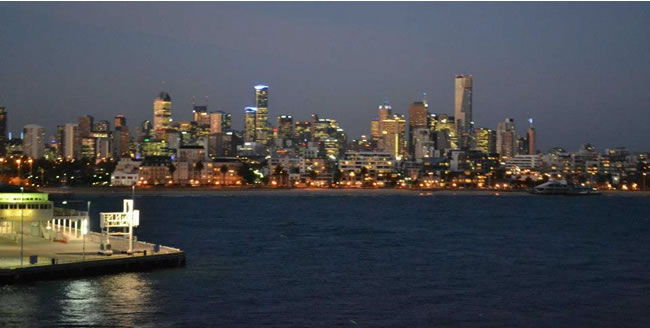 Last view of Melbourne, Victoria, Australia. Autumn 2013. As the Spirit of Tasmania departs Station Pier in Melbourne, this is what you see. Melbourne from Port Philip Bay. 2015.

Interesting to see the changes in the skyline in 12 years. 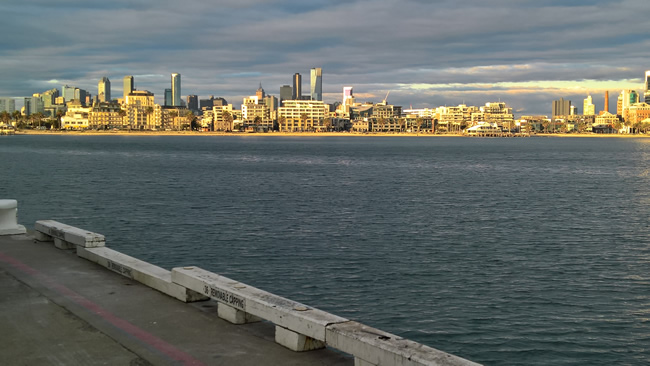 The sun peeks under the clouds and lights up Melbourne, Victoria, Australia. On a spring evening, from Melbourne's Station Pier. The city is brilliantly lit up by the evening sun peeking under the clouds. September 2016 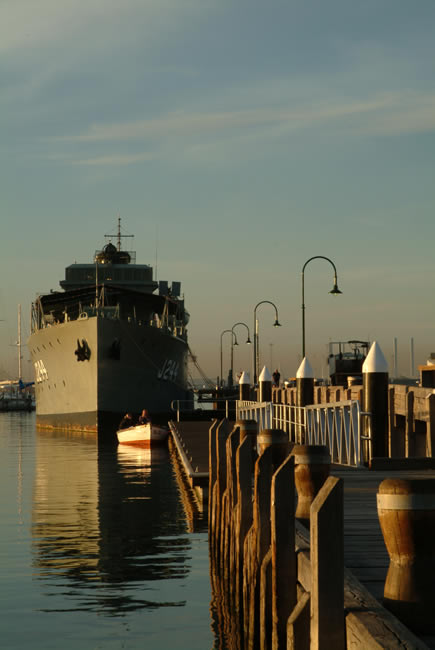 In my shadow, HMAS Castlemaine, at Gem Pier, Williamstown, Victoria, Australia. This little white fishing boat in the shadow of the HMAS Castlemaine” creates a David and Goliath contrast. May 2003.

HMAS Castlemaine is one of the sixty Australian-built Bathurst Class corvettes to serve throughout World War 2, and is the last one still afloat. She has been restored by volunteers over four decades. During World War 2, she travelled some 117,000 miles (216,000 kilometres). In the process she circumnavigated Australia and enduring the constant threat of sea and air attacks, visited China, Indonesia, Papua New Guinea, the Philippines, the Solomon Islands.

HMAS Castlemaine was built in Williamstown and launched on the 7th of August 1941 - so it is quite appropriate that she is permanently berthed at Gem Pier in Williamstown. 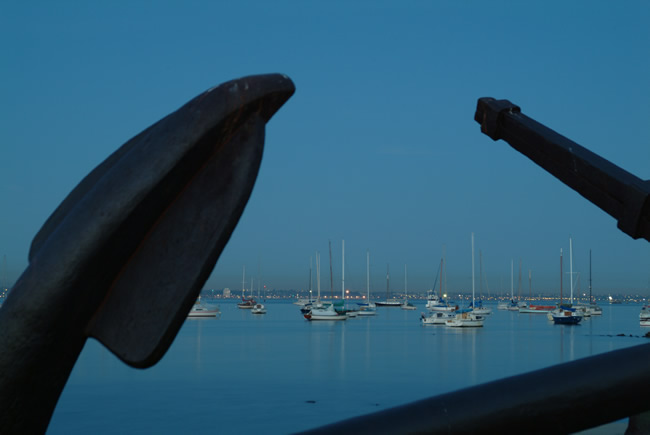 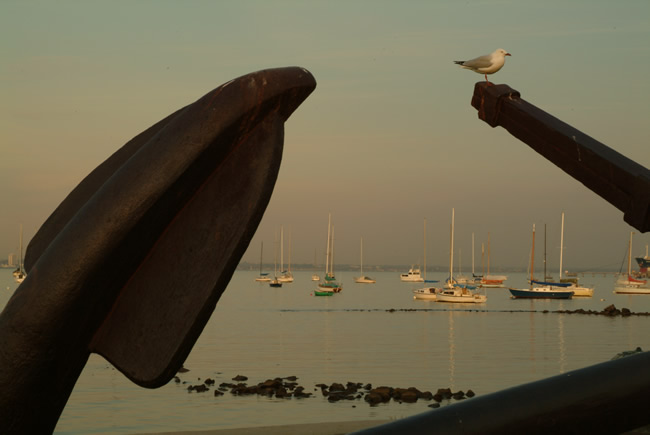 Seagull settles on an anchor at Williamstown, Victoria, Australia. As the sun settles low in the sky this gull settled on this scene adding a little extra charm. May 2003. 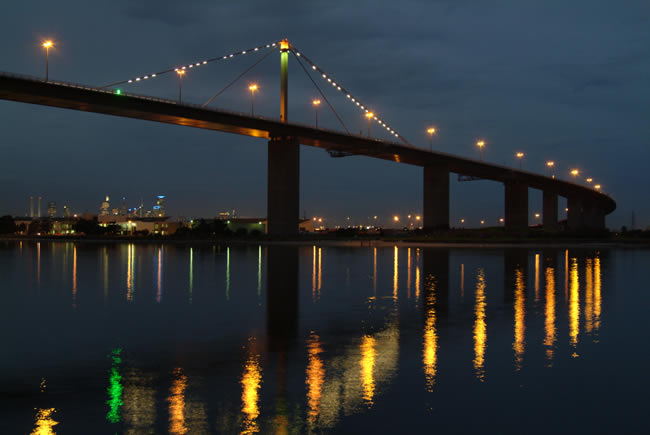 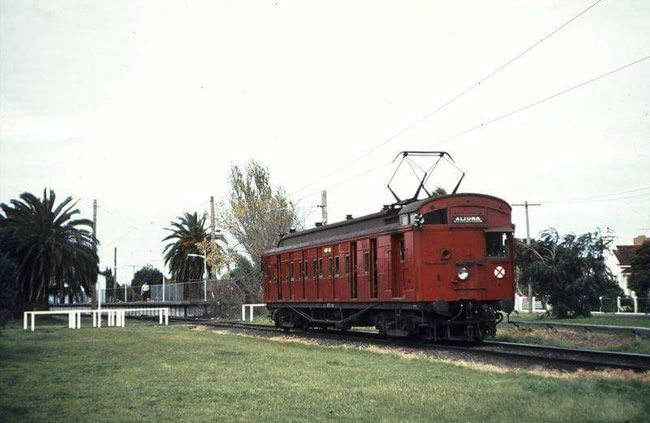 The 'Seaweed Express' electric train, out of Altona, Melbourne, Victoria, Australia. The Melbourne railway system has served the city well over many years. It has come a long way since this pic was taken. This was a Sunday train service with just one carriage, and ran close by Altona Beach and you could smell the seaweed. Hence the name 'Seaweed Express'! 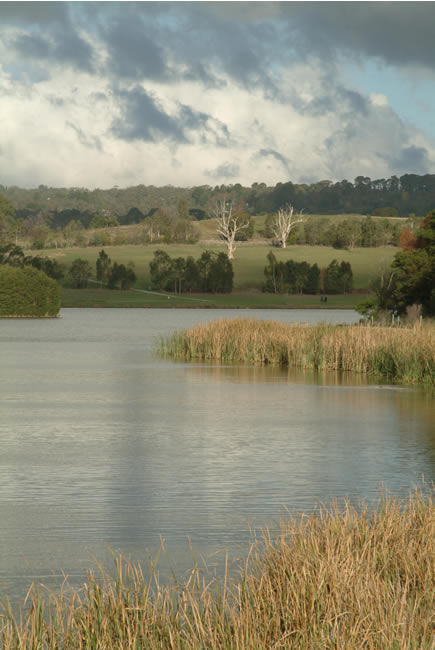 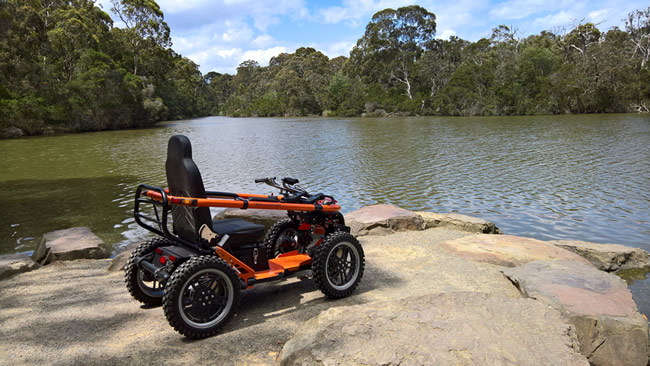 Duck Point on Blackburn Lake, Melbourne, Victoria, Australia. Part of the Blackburn Lake Sanctuary. The Lake itself was formed by the damming of Gardiner's Creek in 1889 to enhance land values in the area, and to provide water for orchards. The company that developed the area also built a jetty and cafe, with row boats for hire. Visitors came from Melbourne on a steam train. A model township was planned, but the housing plans did not work out, though parts of the original layout remain.

Australian artist Frederick McCubbin painted some of his best known paintings, including "Down on his Luck" and "The Bush Burial", in the area. In 1909 the Adult Deaf Society purchased the lake and about 30 hectares of land and established a home for deaf people. They built a home there and established a flower farm, which grew vegetables as well as flowers, for sale at the Victoria Markets.

The lake area was also used during WW1 for recuperation for wounded soldiers.

Beginning in 1938, when the Blackburn Progress Association wanted to acquire the land for a public reserve, there has been a steady progress in protecting the area and making it a sanctuary. A total of 25.8 hectares now make up the sanctuary.

It is indeed a very pleasant place to be and to relax. Walking tracks, picturesque bridges, bush, lake, barbecues, visitor centre...