Geelong. Victoria's second city, situated on Corio Bay. One of the few cities in southern Australia with a north facing aspect over the beach, which means that shadows of buildings don't fall across the waterfront. With the Bellarine Peninsula to the east, the Otways National Park to the west, the Surf Coast and Bell's Beach to the south, and the Great Ocean Road just twenty kilometres away, it's a great place to live. And of course it's home to the Geelong Cats, in the AFL football league ... the greatest team of all! 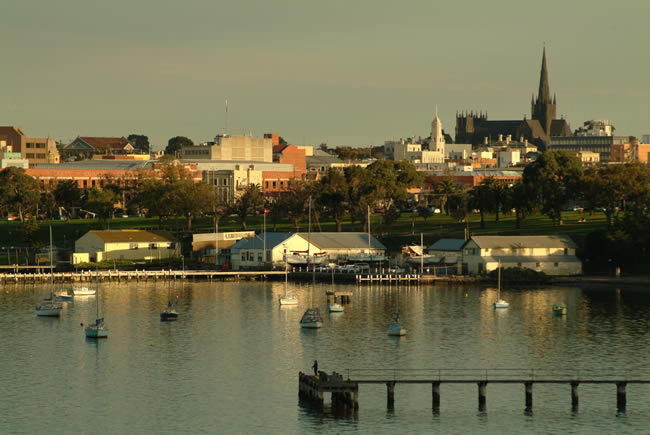 View of Geelong across Corio Bay, Victoria, Australia. This is a pleasant image of Geelong by the water front. It was used in Richard Everist book, Geelong and the Bellarine Peninsula, a BESTSHOTS publication. The book contains a large body of Joe's photography. April 2003 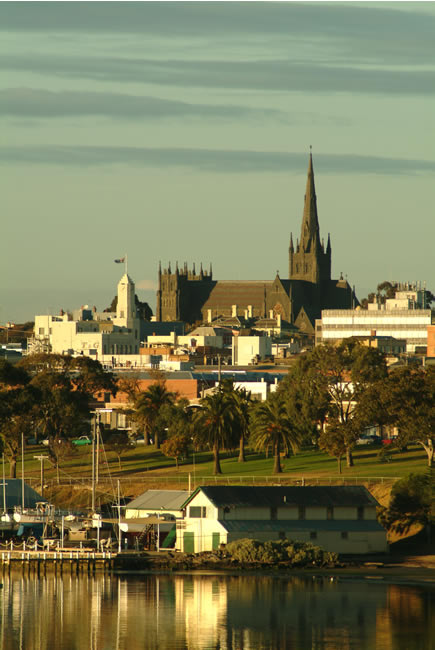 A basilica is one step up from a church in Roman Catholic usage. St Mary's was granted Basilica status in 2004. St Mary's has the tallest bluestone spire in Australia, at 45.7 metres (150 feet) and is the tallest building in Geelong at 64 metres (210 feet). Though the new light towers at Kardinia Park, built to enable playing under lights at Simonds Stadium, at 73 metres high are taller. But these did not come till 2013. 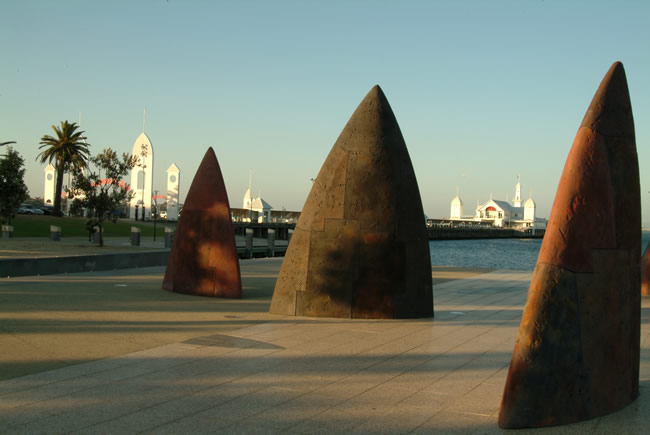 Geelong waterfront and Cunningham Pier, Victoria, Australia. Significant redevelopment has occurred along the Geelong water front. The art deco area of the promenade and pools has had a complete restoration. At weekends large crowds come to visit this area. This shot shows Cunningham Pier and Smorgy’s restaurant from the fore shore. December 2002.

Smorgy's Restaurant is no more, with new businesses using the facilities at the end of Cunningham Pier. An attractive place to dine, and the water views are brilliant! Visiting ships, including cruise liners and military ships, as well as traditional sailing ships such as the sail training ships the 'Leeuwin' and the 'One and All', dock regularly at Cunningham Pier. 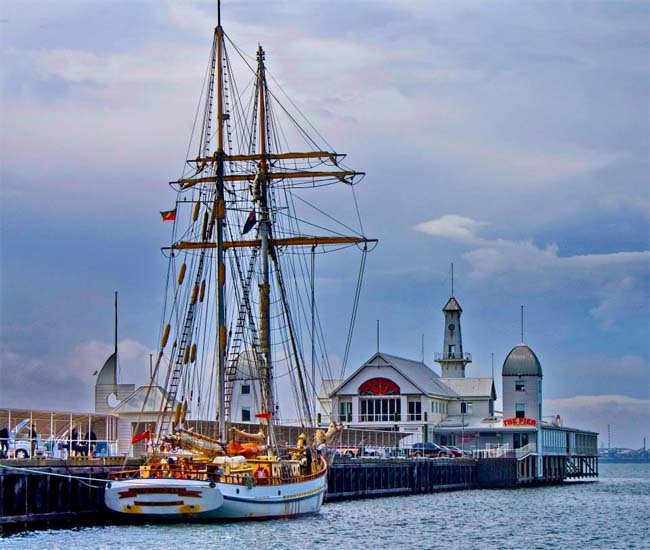 The sail training ship, One And All, at Cunningham Pier, Geelong, Victoria, Australia Based on the rig of an 1850s brigantine, the One and All was built using modern timber construction techniques for the South Australian government in 1987. She is an official Sail Training Vessel, and is available to schools and other community groups for sail training events. Moored here at Geelong's historic Cunningham Pier. 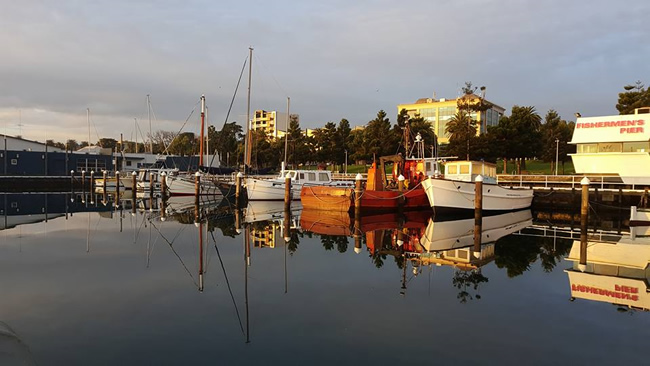 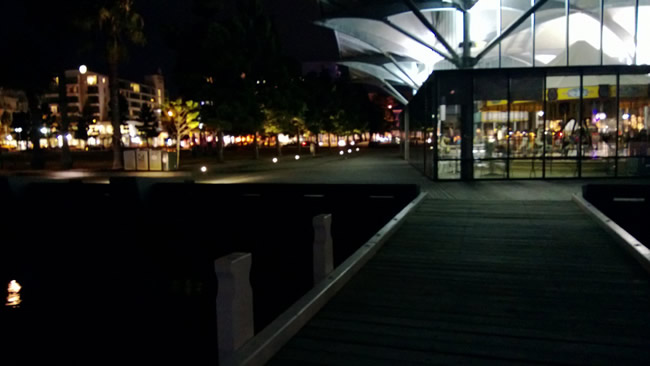 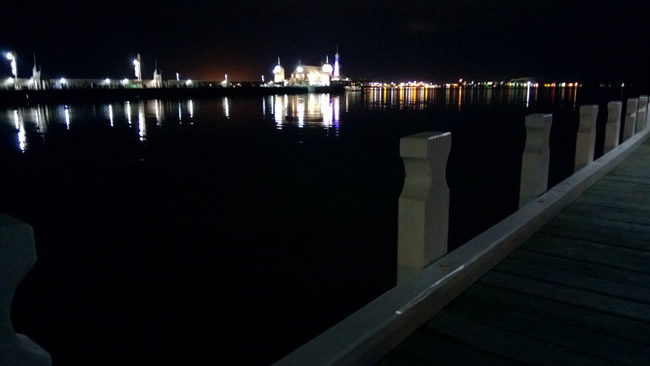 Cunningham Pier with its restaurants and function centres, Victoria, Australia. Cunningham Pier, with the lights of North Geelong and the Shell refinery in the background, from the Geelong waterfront. June 2013. 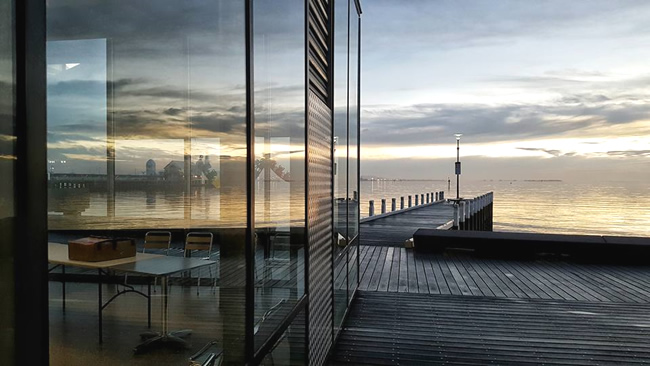 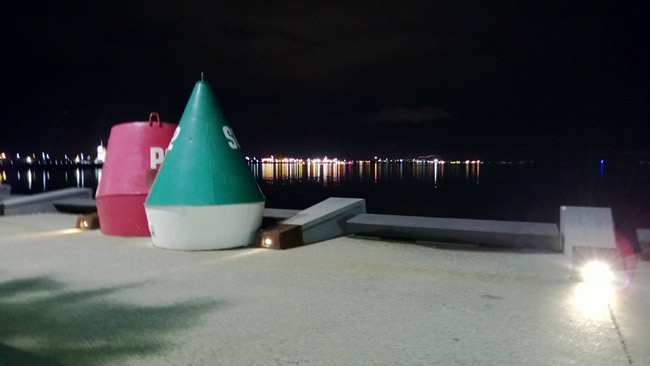 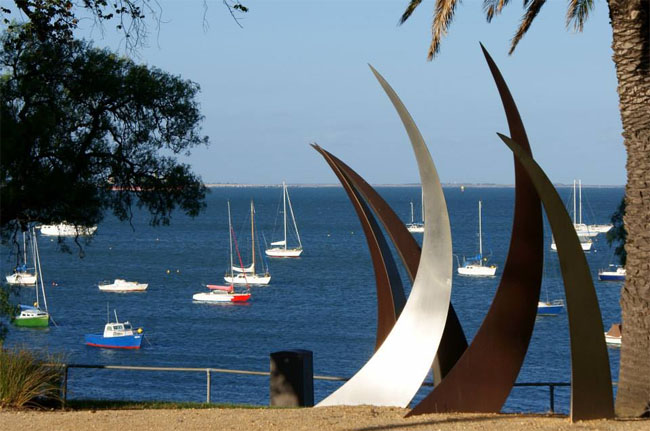 Corio Bay, seen through a beachfront sculpture, Geelong, Victoria, Australia. Looking over Corio Bay from Western Beach. These sail sculptures are one of many along the waterfront, and provide a neat frame for a peaceful pic. 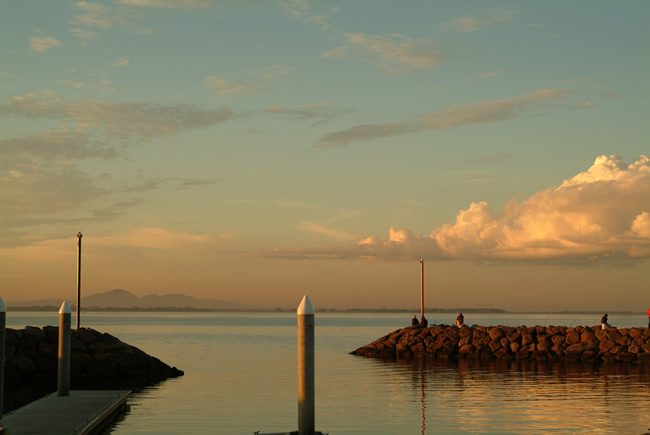 Sunset, Limeburner's Point boat harbour, Geelong, Victoria, Australia. Take note of the changing light on the scene for this set of three images. The last rays of sunset skim across the bay at Limeburner’s Point Geelong. In the background are the You Yangs. Time 5.30pm. May 2003. 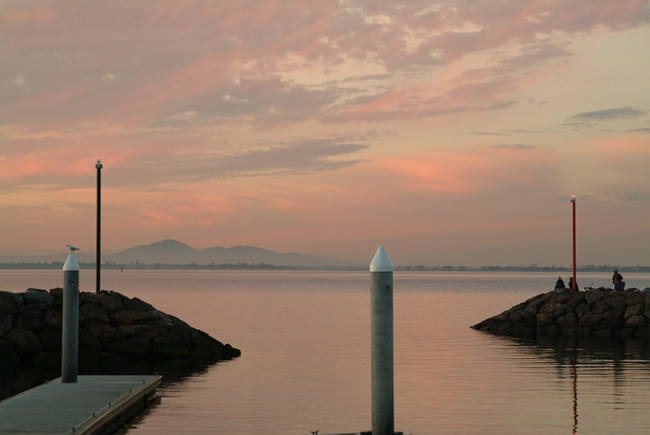 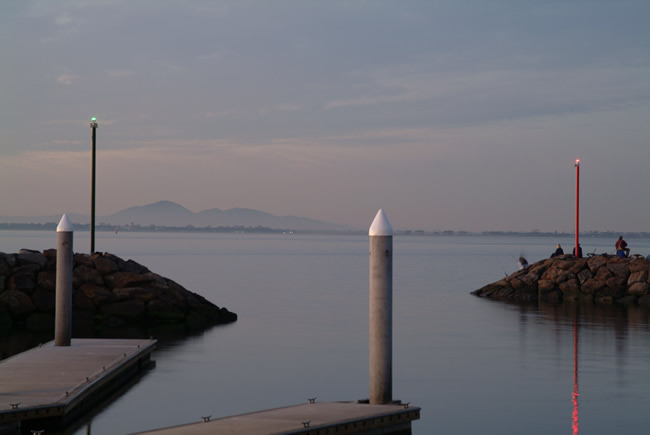 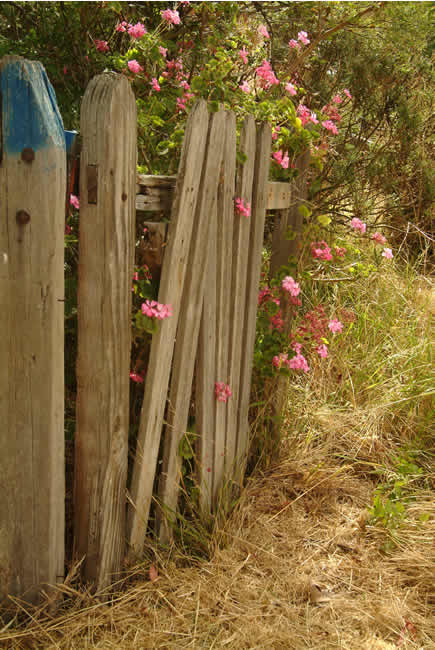 Gateway, Batesford, near Geelong, Victoria, Australia. An old gateway, nestled in the overgrown garden of a disused home site, situated along a country lane near Batesford. The sunlight skimming through the dry grass adding warmth to this charming scene. January 2003. 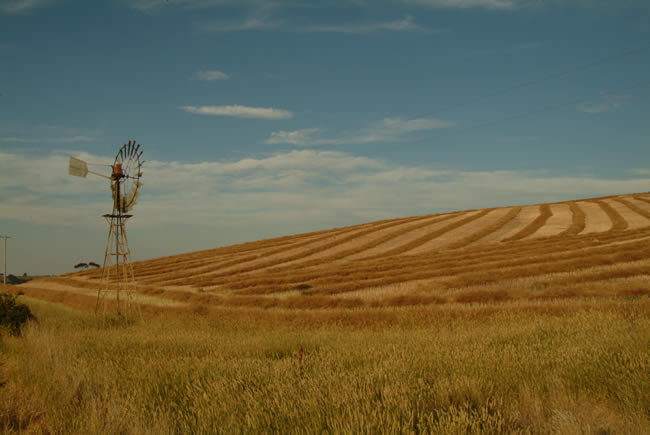 Windmill on hay field, at Ceres, near Geelong, Victoria, Australia. Windmills remind us of how dry our country is. The rolling hills of Barrabool on the edge of Geelong have been a favourite place for photographers to visit. I have not been able to find out why the farmer created the patterns in his field. December 2003. 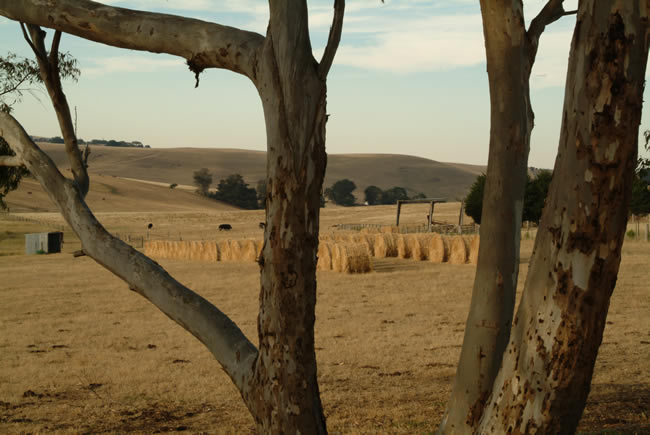 Hay bales in a field, at Ceres, near Geelong, Victoria, Australia. The rolling Barrabool Hills near Geelong. I always liked seeing the rolls of hay bales in the country side and I enjoyed adding depth to the scene by capturing them through the trees. December 2002. 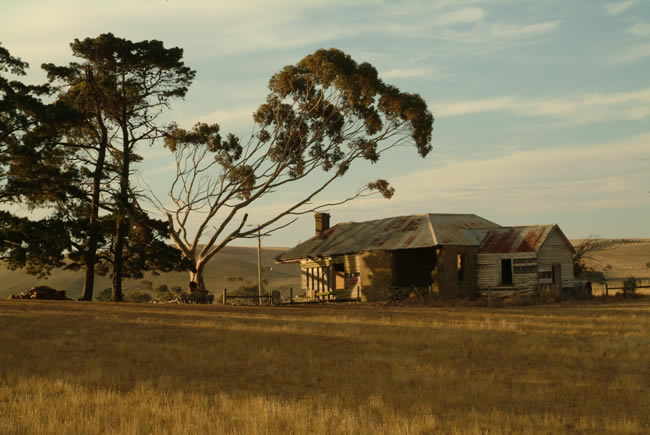 Old farm house, at Ceres, near Geelong, Victoria, Australia. An old farm house in the Barrabool Hills near Geelong. The charm of old farm properties always attracts. Captured during a dry summer the warm evening sunlight adds a golden glow to the scene. December 2002. 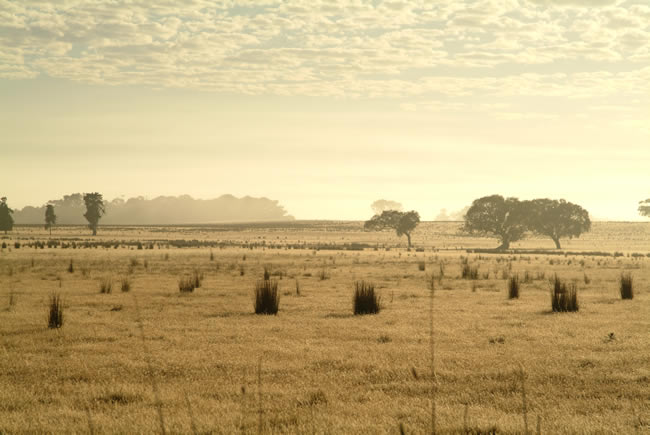 Dry pasture, at Mt Duneed, near Geelong, Victoria, Australia. This was my first exposure with a new professional digital camera. It was a quick response to seeing the misty morning over the fields below Mt Duneed. December 2002. 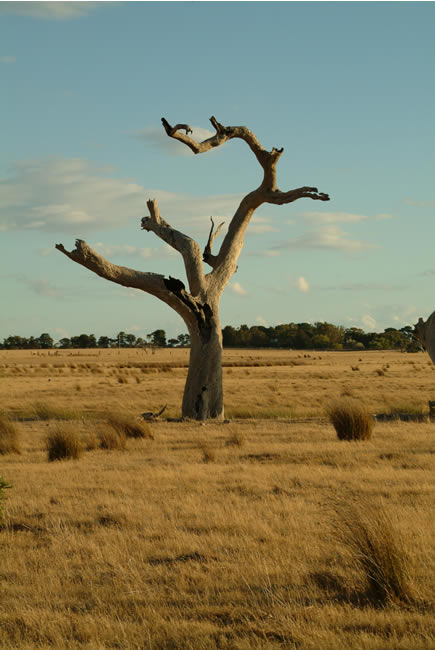 Dry summer, at Mt Duneed, near Geelong, Victoria, Australia. Driving along a dry weather only road this dead tree off Horseshoe Bend Rd, near Mt Duneed, looked dramatic as the sun started to set late in the afternoon. Standing out against the dry summer grass, and having had many years of drought, it conveyed the harshness of our land. January 2003. 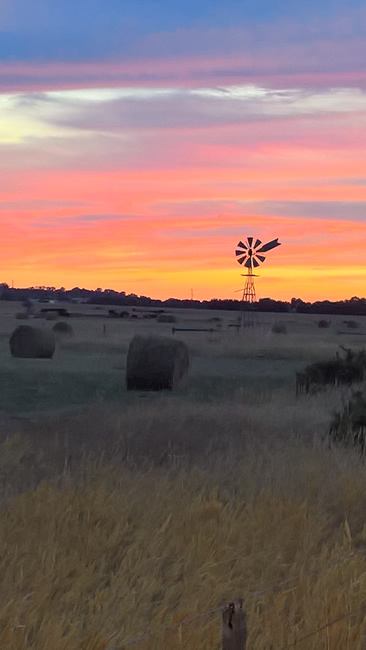 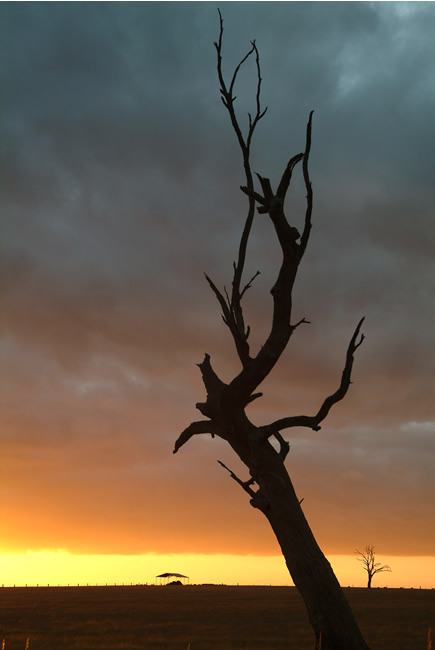 Hay shed at Maude, near Geelong, Victoria, Australia. Our Australian landscape is dotted with hay sheds, and as a part of this landscape picture, reminds us of our harsh dry continent. Near Maude. January 2003. 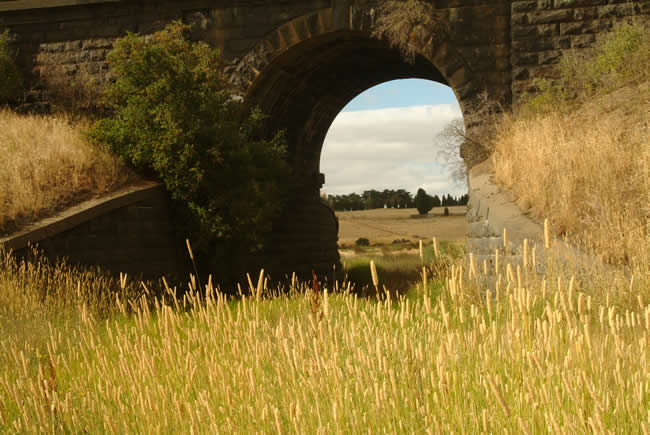 Old stone railway bridge at Gheringhap, near Geelong, Victoria, Australia. Sun burnt grasses and dry summer pastures are part of our Australian summer. The old railway bridge ties these elements together in this landscape near Geringhap. January 2003. 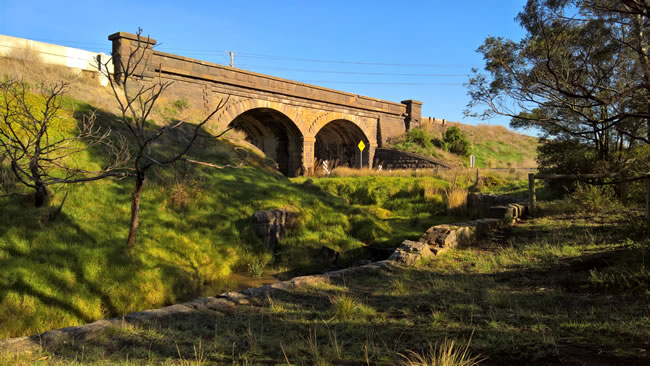 Old stone railway bridge at Lovely Banks, near Geelong, Victoria, Australia. The two arches of this old bluestone bridge allow both the road and the creek through under the railway line. The appropriately named Bluestone Bridge Rd runs under the right hand arch; the creek under the left. In the foreground you can see the stone walls built to direct the creek many years ago. May 2016. 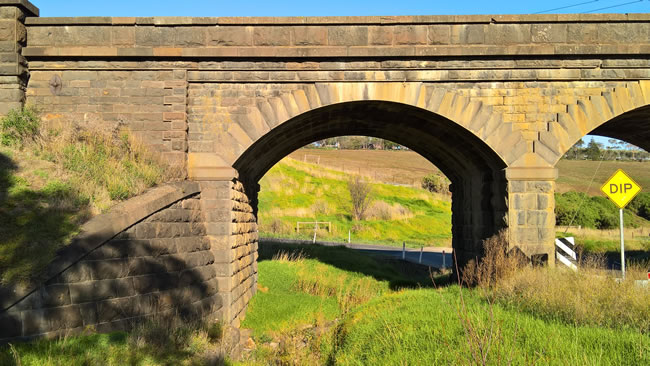 Detail of old stone railway bridge at Lovely Banks, near Geelong, Victoria, Australia. The Bluestone Bridge Road can be seen snaking through the right hand arch; the overgrown creek under the left. Note the bolt and re-enforcing plate at the top left near the pillar. On the hill in the background is an olive grove. Covenant College is on the other side of the hill. May 2016. 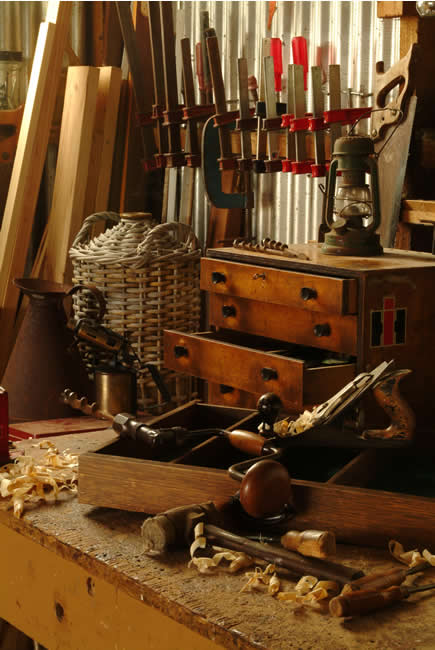 Craftsman's workbench, Geelong, Victoria, Australia. Joe's wife’s father has always been a capable wood worker. Here we gathered some of his old tools on his bench to record a warm moody image. June 2004. 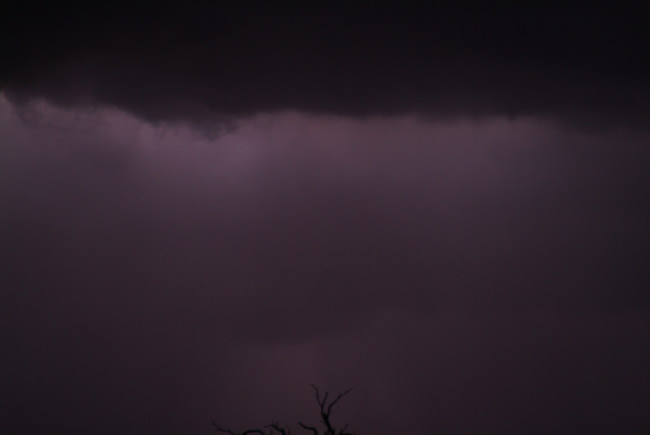 Sheet lightning, Anakie, near Geelong, Victoria, Australia. This hand held shot, pointed at clouds with the tip of the tree in middle was captured during a lightning and rain storm. The shot was taken out of the car with lens resting on the drivers window edge, and shutter kept open on “Bulb”, and then closed after a lightning flash. Captured in the rural area of Anakie township. December 2004. 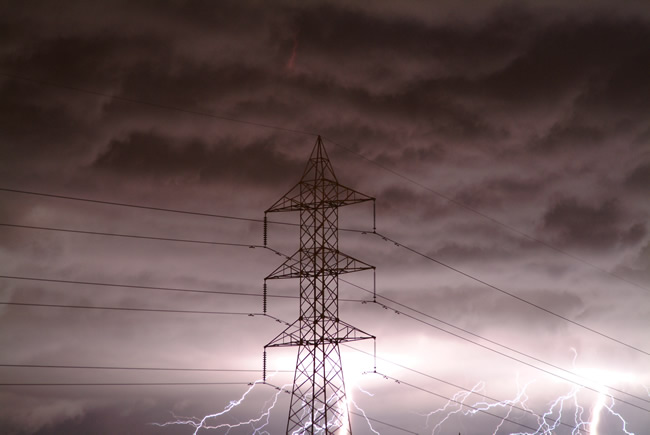 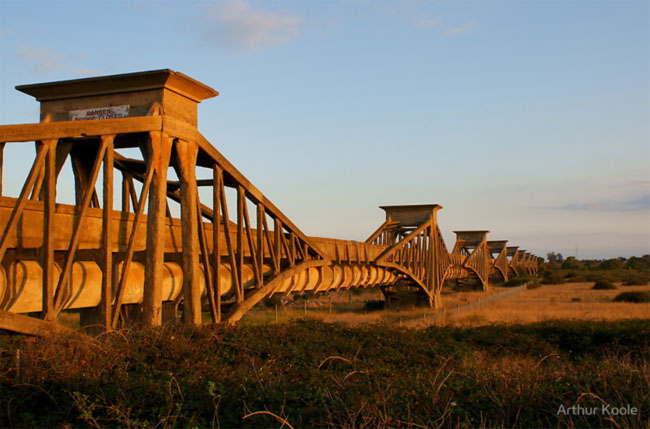 This very interesting aqueduct was built from 1913-1915 over the Barwon river, just south of Geelong. It was built to take sewage from Geelong to the treatment plant at Black Rock, near Breamlea. It was built by the Tasmanian engineers Edward G Stone and Ernest J Siddeley. The style was modelled after the steel Firth of the Forth bridge in Scotland, but was built of reinforced concrete.

Using the 'Considere' system of concrete reinforcement, cantilever trusses were built on fourteen concrete piers, with concrete girders between them, for a total length of 756 metres. The ovoid shaped sewer pipe was suspended underneath the girders. Cracks in the concrete appeared pretty quickly, and repairs were made in 1923.

The aqueduct was decommissioned in 1992, though it still remains there. It is in a state of disrepair, and there is no public access. 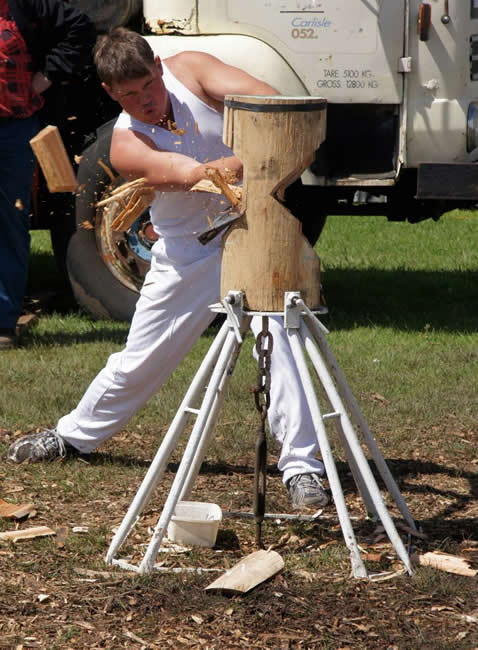 I well remember them from when I was a young fella growing up, at the Harvey Agricultural Show, Western Australia, in the 1960s.